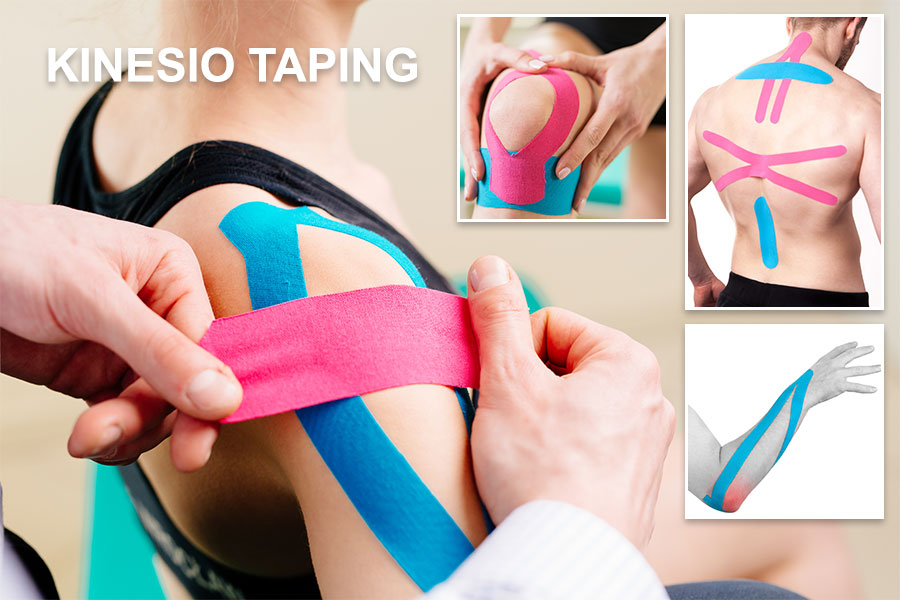 The Kinesio Taping Method (aka KT) is felt to cause physiological effects on several body systems. The systems affected by the body are thought to include the circulatory/lymphatic, neural, muscular, and fascial systems, as well as the joints. Kinesio Taping is currently being used by physical therapists to change muscle tone, move lymphatic fluids, correct movement patterns, and improve posture and decrease bruising. KT is a unique method of applying specific tape in a specific manner to create change in the aforementioned systems. Benefits of using the tape are that it is easy to learn and apply, it is fairly inexpensive, there are less types of tape, and it may be used over a longer period of time.

The Kinesio Taping Method differs from athletic strapping (not picttured) tape and the traditional McConnell Taping Method (seen below).  Athletic strapping tape is used mostly to limit ranges of motion and to constrict muscle movement. The effect of this method is to create a bridge over the areas that are injured so that athletes can perform sport movements and have either prophylactic support or support to an injured part of the body. Similar to using a brace.  Athletic tape is typically removed after the end of an athletic event.

The McConnell Taping Method is a technique that tapes body parts to affect a specific movement.  McConnell Tape uses a very rigid, highly adhesive tape that is applied for no more that 18 hours and often for shorter periods of time due to patient discomfort.