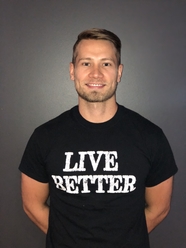 David Kitchen was born in Manchester, United Kingdom and has been living in the United States since 2017 after marrying his wife. He is a UK trained physiotherapist graduating from Sheffield Hallam University in 2009 and has worked in an outpatient and field for the last 8 years incorporating his NASM personal training programs into his rehab and exercise therapy. Since becoming licensed he is excited to continue his Physical Therapy career here in the USA.

His career in UK started in the National Health Service where he gained his initial experience, and he soon moved up to Senior Physiotherapist specializing in outpatients. He continued to progress incorporating Spinal rehabilitation into his profession working closely with surgeons as an Extended Scope Practitioner for One Health in the UK. His career has given him considerable insight into any previous injuries you may have and he will be able to provide one on one hands on rehabilitation as well as train you in the best way possible to in prevention of any further injuries.

He has been interested in health and fitness throughout his life; he used to run track for his school and district and was also captain of his college rugby team. His most recent interests include fitness, woodwork, resistance training, mountain biking, kayaking and generally anything outdoors.